Here it is, the first of 25 games: An Eye for Treasure. 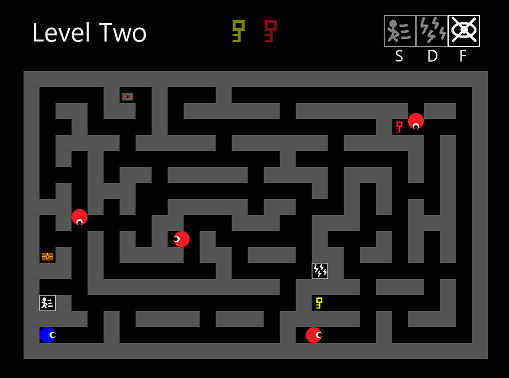 Sneak around, avoid red enemies, collect keys and use them to open the matching chests. Three Levels. Pictured above is level two (obviously).

S – Speed Boost: When you have and activate this powerup you’ll move more quickly

D – Stun: Disable all enemies for a few seconds. They stop moving and spin around.

F – Phase Out: Become invisible and invincible for 3 seconds. Good for getting out of a tight spot or shaking a chasing enemy.

I wanted to start simple for my first game so I decided on navigating a maze with baddies, and collecting things to progress. I wanted to work on simple enemy pathing code and also start with something relatively easy to finally convince myself to stop dragging my feet and get used to Gamemaker Studio 2. Also a healthy reminder that I am not an artist in any way, shape, or form, the design is merely meant to be functional.

Here’s what I learned from the experience:

-I need to stop leaving variables like powerups and other level info on the player object code. Move that crap to the game/level objects Jonathan.

-Enemy pathing, following the player when they see them, and navigating a maze without getting too stuck in one area. It’s easy to make them just move in a direction and then change when they bounce off walls but I wanted them to be a little smarter than that, choose paths as they become available, and not go back and forth so much. It’s not perfect but it got a lot better over the week of making the game. Some solid basic enemy movement

-The most time intensive parts of making the game was all the fluff. The key icons at the top of each level and the main menu maze. Both weren’t needed but fun additions to add to make it feel a little more complete.

-The speed boost power-up isn’t really that useful (and actually hard to control) but it stays in because I couldn’t think of a better, easy 3rd power-up. I thought about doing one that let you flash over walls but the speed boost was easier to implement. Ah well, we move forward.

-I’m super freaking rusty at this programming/game making thing. Good thing this is the 1st of 25.

And we’ve done it! One game down, 24 to go! Let the training montage continue!

One thought on “Game #1: An Eye for Treasure”